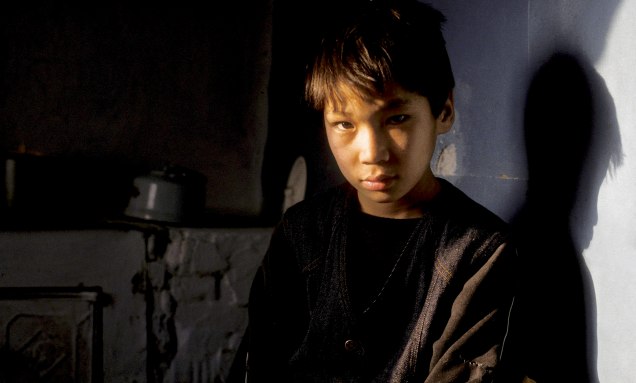 KRANSY YAR – The sick, the weary and the curious gathered in the school auditorium to see the doctor from Moscow. He was a tall, mustached man, rather handsome in his dark suit and tie, and he spoke extensively about his scientific credentials garnered in the capital 4,000 miles to the west. How he’d found his way to this remote village was a mystery. Why he’d come here was a mystery. The sick and weary waited patiently for an explanation, and possibly a miracle.

I sat in the audience with Svetlana, who suffers from migraine headaches. Last month, in search of a cure, she endured the treatment of a traveling acupuncturist from Moscow. The acupuncturist, a middle-aged woman, had diagnosed her at the village clinic by waving her hands over her body. Then she told Svetlana to sit down, and she stuck needles in her head, face and arms. Svetlana tried this treatment every day for a week. It didn’t work.

Maybe this man from Moscow could help? He looked over his audience of about 20 people, smiled, stretched his arms outward and asked for a volunteer. A teenage girl nervously approached him. He told her to shut her eyes, and then he placed his large hands on her forehead. He whispered to her. He gently caressed her head, pushing the weight of her body back and forth. Then he told her to stoop to the floor and pick up an imaginary apple and eat it. She did this, exactly as he had said. When he snapped his figures, she opened her eyes, giggled and rushed back to her seat while everyone applauded. For his next trick, the doctor took off his shirt, broke some empty bottles on the floor and stretched his body over the glass. A young man stood on his chest. The doctor apparently felt no pain because he kept grinning at us. At the end of the show, he urged people suffering from all sorts of physical ailments to see him for personal consultations, for a small fee.

We didn’t stay that long, however, because Svetlana’s sister had come into the auditorium with a terrible expression on her face. She took Svetlana by the arm and brought her out into the hall, and there she told her that their father was dead.

He had died of heart failure a few days after his 65th birthday. He lived in a small village more than 300 kilometers northwest of Krasny Yar. He belonged to a tribe of people called Nanai. There are about 2,000 Nanai in the world, and most live on the flat Amur River basin near Khabarovsk and work as fishermen. The Nanai have a different but related language. Like the Udegeh, only the elders still speak the Native language.

A young Russian businessman in Krasny Yar volunteered to drive us (Svetlana, her sister, her brother-in-law and me) to the Khabarovsk train station. We drove all night on the unfinished military road, a three-lane gravel highway that starts in Khabarovsk, cuts through the taiga and reaches a dead end about four miles from Krasny Yar. Our little Toyota endured two flat tires during our six-hour journey down from the mountains to the city. Yet, when the young driver dropped us off at the train station early the next morning, he refused to accept any payment.

In Khabarovsk, our funeral party was joined by Svetlana’s 18-year-old daughter Sasha. We traveled westward on the Trans-Siberian Railway for two hours. We disembarked at a grubby little rail town. Svetlana’s brother-in-law Valera was there waiting for us with a jeep and a sack filled with 20 bottles of vodka. Vodka apparently is necessary for funerals, since Svetlana had brought 15 bottles with her. I sat in the jeep’s rear compartment, with all the vodka, and we rattled northward over frozen lakes and swamps. There was no road I could discern. After an hour, we reached a stand of birch and Mongolian oak. Then we came to a cluster of houses. This was Natsonalnoye, a Nanai village of about 200 people. Svetlana’s mother was standing at the gate of her house. Svetlana and her sister rushed out of the jeep and threw their arms around her.

I had never met Svetlana’s mother before. A small, heavy-set woman, she’s 62 but looks a decade older Her breathing was labored. She walked so stiffly it seemed as though every movement made her wince. She led us into her house – a musty, three-room structure crowded with people. In the living room lay her husband, a small man, with high-Asian cheekbones and a round Nanai face. He was dressed in a black suit. His body was on a board that had been laid between two chairs. The house had been kept unheated to preserve the corpse. Sweet-smelling incense burned.

The trip had been exhausting, and after eating a meal of soup and bread Svetlana and we fell fast asleep in the bedroom bundled in our winter coats. In the middle of the night, I woke up and looked into the kitchen. Elderly Nanai men were smoking and playing cards. According to the custom here, people have to remain with the body at all times.

Strong winds buffeted the house all night. We awoke the next morning to find the ground covered with a foot of wet snow. Svetlana said that a storm following a death is a sign that God is angry.

We had to wait three days, until Tuesday, before we could bury Alexander Lesnikov because the elders said it’s bad luck to bury a man on a Monday. On the final night before the burial, Svetlana and I took our turn watching the body. By then it had been placed in a casket built with rough lumber. Red cloth was draped over it. The  odor of death was strong.  A cloud of smoke from the incense candles filled the room. In the kitchen, Sasha cooked a large stack of blini, thin pancakes, to be eaten during the feast following the burial.

The funeral the next day was an intermingling of Russian and Nanai traditions, but I had a hard time telling which was which. Before the body was taken to the cemetery, an old woman came into the house and began to speak in a tongue that sounded vaguely Chinese. It was the first time I had heard Nanai spoken. She chanted prayers and poured vodka into the casket. Then she passed the glass around to everyone to take a sip. She repeated this several times, but instead of pouring the vodka into the casket, she now poured it into a bucket that had been set underneath the casket. Svetlana’s mother tucked her husband’s hat and gloves in the casket near his feet. Then she gathered her three daughters around her and walked to the head of the casket, and there they wept.

Four blank-faced village men entered the room and lifted the casket to their chests. They carried it to the street and slid it into the back of the jeep that had brought us into the village. We began our march. Half the village walked in front of the jeep, and half walked behind. Some people in front carried the casket’s lid and the wooden grave marker, an obelisk covered with red felt and adorned with a hand-carved star. Immediately behind the jeep, I walked with Svetlana and the rest of the family. I’d seen open caskets like this carried in the streets of Khabarovsk. A brass band typically leads the procession in the city. This procession, however, moved silently. We walked until we reached the cemetery set amid small trees at the edge of the village. Someone had lit a bonfire next to an open grave. Then men began pounding the lid onto the coffin.

“Tom, come here,” Svetlana’s mother said. I walked over to her, and she handed me the hammer. Aware of the eyes of the whole village upon me, I carefully banged in the last nail.

The pallbearers lowered the casket into the grave, and everyone pushed dirt on top. Some people had shovels; others used their hands and feet. Eventually, we built up a mound. Two men stamped the obelisk monument into the head of the mound. One of them nailed a wooden sign carved with the name of Svetlana’s father. Another glass of vodka was passed around; people poured a little into the earth before sipping it. Finally, as the crowd headed back to the house. Svetlana’s mother, alone, walked to the grave marker and placed underneath it a small plate of food and a glass of vodka.

We stayed in that village for four days. Svetlana, her daughter and I were the only ones who didn’t drink any of the vodka, and we felt increasingly isolated as the funeral party slipped into a stupor. Svetlana’s relatives planned to stay in the village for another week. We wanted to leave as soon as possible, but the spring snowstorm that had fallen during our first night made escape impossible.

The next morning we heard a noise that sounded like a tank rolling into the village. We ran towards the direction of the clatter and discovered a slow-moving truck with tank treads. The vehicle, which had an enclosed rear cabin, was designed to transport workers over the tundra. After some negotiations, the driver agreed to take us to the train station.

Bundled in our heavy coats, we rode in the machine across the vast, frozen. I don’t know how workers can stand riding that contraption every day. Black clouds of exhaust fumes leaked into the passenger area, and we covered our mouths with handkerchiefs. One worker sat with us. He was evidently accustomed to a daily dose of poison for he didn’t bother covering his mouth. His face was as cold and gray as the tank’s metal siding. I peered out at the frozen marsh through the open rear window. A thick fog blended the sky with the snow, robbing the scene of all depth and color. We passed an island of Mongolian oak trees. Even though winter was almost over, faded yellow leaves still clung to the branches. 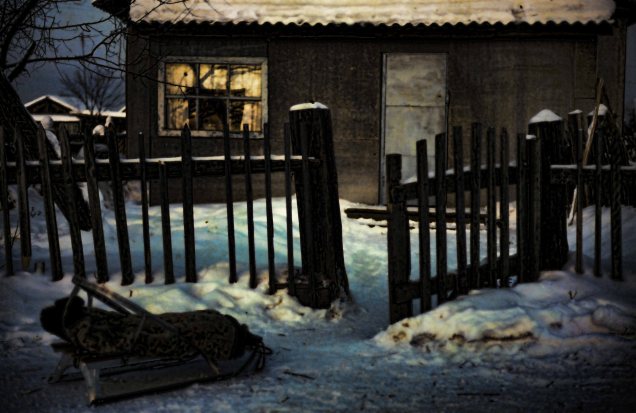 2 thoughts on “A Bitter Journey”